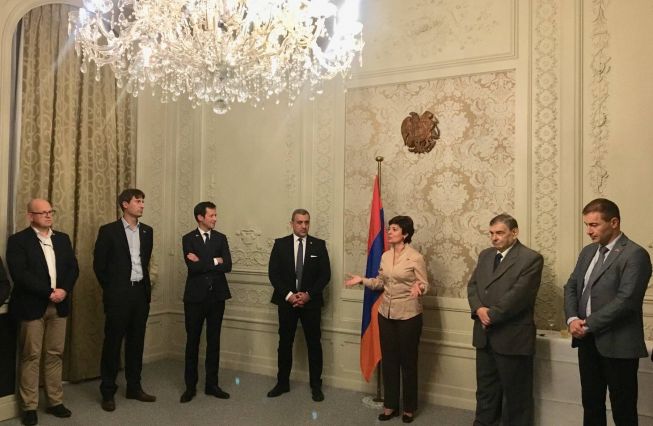 
On November 9, the Mission of Armenia to the European Union hosted the members of the Friendship group with Armenia in the European Parliament.
The evening, organized jointly with the head of the Friendship group, MEP Loucas Fourlas (EPP, Cyprus), was the official launch of the group and one of the series of events marking the 30th anniversary of independence of Armenia.
A minute of silence in the memory of all those killed in the Second Artsakh War was observed.
Ambassador Aghadjanian thanked the members of the European Parliament for the principled approach shown during the challenging previous year, for the consistent efficient cooperation and for standing by the Armenian people.
The chair of the group MEP Loucas Fourlas underlined Armenia’s achievements during the thirty years of independence, the chosen democratic path, and his commitment to support the Armenian people in the current difficult situation, in the complicated geopolitical environment. The MEPs also praised the cultural ties and the values shared between Armenia and each of their respective countries and the significant role of the Armenian communities in strengthening those ties.
The event was also an occasion to exchange ideas on the future activities, including in cooperation with the European Armenian Federation for Justice and Democracy (EAFJD).
share:
MFA RA
official website
Dual citizenship
Electronic visa
Visa applications